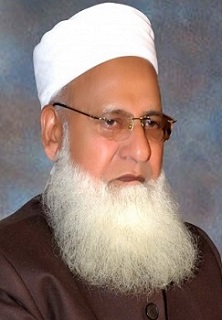 This was not a conventional (khilafat) succession; rather it was a token of trust in his ability to lead in the next generation. In 1951, he came to Pakistan to meet his relatives. He used to narrate this event as: “My country was actually Hindustan. I had to come with Hazrat to serve him. But due to some reasons, Hazrat [Shah Abdul Qadir Raipuri] couldn’t come. But when I planned to go back, my father [Shah Abdul Aziz Raipuri] tore off my passport and did not allow me to go back. I was very worried. In a few days, Hazrat Hazrat [Shah Abdul Qadir Raipuri] came to Pakistan and I was satisfied and then to fulfill his request, I had to stay here.”